Please make your selection from the dropdown below.

The memories of downtown Hamilton for those of us who grew up in the 1950’s and 60’s are those of the soda fountain in the back of the Renner’s drugstore and the animated displays in the Eaton’s windows where my sister and I stood watching until we were almost frozen. But these memories would not be complete until we had recalled to mind Birks jewellers.

The Gothic, Connecticut brownstone that was located on the southeast corner of King and James Streets was erected circa 1883. A fire destroyed a large portion of the building in 1929 and from the ashes rose one of the finest public buildings on the continent, which became known as the ‘Birks Building’.

The changes included a copper roof, show windows and an enormous clock that hung outside. The famous Birks clock was modeled after ‘The Clock of the Charging Horsemen’ designed for Wells Cathedral in Somerset, England. Circling the lower section, designed to look like a medieval castle, are jousting knights on horseback, which charged around the castle, engaging in a mock battle every hour to the delight of shoppers.

A purchase from Birks became a source of pride for Hamiltonians. Birks was known far and wide as a place for discriminating people seeking fine jewellry and unique gifts. Every purchase was wrapped in white tissue paper and packaged in the coveted blue box. The fantastic character of the building along with the service and magnificent display windows, which were the equal of those in New York, helped to give the downtown core it’s vitality. Although the building was torn down in 1972 the clock was saved and mounted outside Jackson Square. Those memories of what had once been will reside in our minds forever. 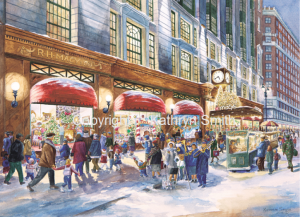 ”City Sidewalks”
is back in the form of a beautiful
limited edition Giclée on Canvas. 20″ x  28″